In November, 2018, Dr. Marian Olpinski traveled from Chicago to Uganda, East Africa with a group of people in support of Juna Amagara Ministries, an orphan rescue organization founded in 2004. Dr. Olpinski is a Polish/American pediatrician practicing at Alexian Brothers Hospital in the northwest suburbs of Chicago. This is his report:

I have to tell you I was stunned at what I saw. I was expecting to see poor, demoralized people living in shabby conditions but what I found was enterprising people poor in material goods but rich in hospitality, community, sense of family and faith, a boundless faith in God. The children are beautiful even though one of them told me I look like an animal because of my hairy arms and face. Moreover, the country offers spectacular scenery, more stunning than any other place I have been in Europe, Asia or Central America. From snow-capped mountains to deep green valleys on the equator to the origin of the Nile River to wide savannahs, the country is well-named as the Switzerland of Africa.

I first heard about Uganda from my wife Basia who attends a Bible study at Willow Creek Community Church in Barrington, IL. The leader there is Peggy Walding who is also the Chairman of the Board for Juna Amagara USA. Basia would come home, excited by stories she had heard from Ugandans visiting the class. She became involved with several projects, one of which was sponsoring a girl named Brenda through nursing school. Together, we helped support a young man named Godfrey through medical school. Early in 2018, we went to a celebration banquet for Juna Amagara where we met many of the people involved with the organization. So, when the opportunity to join Peggy on a trip to Uganda in November 2018, we jumped at the chance.

Most people traveling to Uganda fly from the U.S. to Europe to Entebbe Airport. However, since most of our time would be spent in the Southwest corner of the country, we flew into Kigali, Rwanda. Juna staff met us there and transported us to the town of Kabale where the real adventure began.

Thanks to Dr. Gilbert Mateka, I was able to visit Rugarama Hospital, a church-run facility of 150 beds. The conditions were horrible. Such a basic thing as hand-washing to prevent infection was not possible because there was no running water or soap. We take these things for granted, yet the staff did what they could. In light of the conditions, this customer care motto on the wall brought a tear to my eyes:

I will not worry about the result. I will help as many as I can as efficiently as I can, as lovingly as I can. I will leave the rest to God who gave me the chance to serve.

Later I would have the chance to lecture to 140 professional staff at a hospital in the city of Mbarara. The topic? The importance of hand-washing.

On a rainy Saturday afternoon we traveled to the Mbarara University of Science and Technology to witness the graduation of our sponsored student Godfrey Bampabwire. It was a colorful pageant complete with robes, floppy Renaissance hats, and 400 proud families cheering their children into adulthood. Dr. Godfrey is from Kishanje Village, a rural area of subsistence farmers where he had been an officer at the government health clinic. One day a missionary asked him what he would like to do with his life. He said he would like to be a doctor. The missionary asked, “What’s stopping you?” He replied he had a wife and kids and he could not afford medical school. “I think you would make a fine doctor,” the missionary said. “Let’s pray for God’s mighty hand in sending you to medical school.” Six months later, Dr. Godfrey was in medical school. Sponsors were found to pay tuition. The ministry opened its first standalone clinic in anticipation of his graduation. So, today, after finishing one year of government internship, Dr. Godfrey will return to HEAL Medical Center to build his practice. He is the first person ever to become a doctor from his village.

The next day we went to the Anglican church in Kagyera where people came from miles around to congratulate the young man and his family. With a packed sanctuary, two choirs and four offerings, sermons and prayers, we all had kids in our laps. Church lasted four hours and we did not want it to stop. Many people donated farm goods if they didn’t have cash. Chickens, avocados, sugar cane… one guy donated a goat. Those items were auctioned off. As a visitor, I wanted to support the effort so I paid 250 American dollars for the goat. I was told later that was probably the most expensive goat ever sold in Uganda. The people loved that were there. There was so much joy, I will never forget.

After church, we went to Dr. Godfrey’s family home where lunch had been prepared for over 1,000 people. More music, dancing, gifts and cake. It was a huge day. The next day, Monday, Dr. Godfrey and I worked side by side at the ministry’s HEAL Medical Center in Rubanda where two babies were born and others came in with various ailments. The cases for children were not that much different that I see in America or even Guatemala. AIDS is still present in Uganda though medicines now keep it under control. I got to watch Dr. Bampabwire work. He is an excellent doctor, still in touch with me, calling me his mentor. I am honored.

Juna Amagara calls itself an orphan rescue ministry. Founded during the AIDS era, there were tens of thousands of children left without parents with no way to survive. Juna Amagara took in some of these children, put them into Grandma-headed homes, fed them well, send them to school. Given a chance at life, the children thrived. Most of the original 14 kids are through university now, living as educated, moral, passionate people who give back to their communities. Today the ministry cares for over 850 children with its own schools in five communities.

I had a chance to have an informal conversation with a group of high school boys in Kishanje Village where there is no electricity or running water. For an hour, I answered their questions about U.S. politics (Will the U.S. attack North Korea?) geography, science and personal things. I could have stayed there all day because the questions came from genuine curiosity, completely unfiltered. We laughed many times. I could see these young people as strong leaders in their society.

We were fortunate to have with us on this trip Lee Mulder, who found Juna Amagara in 2004 — originally from Chicago but now living in Florida. I like this guy. Everybody in Uganda seems to know him. He taught me some local language. He laughs and dances and truly loves these people. They call him Shwenkulu – grandfather. Seeing what was started 15 years ago seems incredible today. But if you ask him, he will say it took the vision of a Ugandan man named Ben Tumuheirwe to bring American visitors to his village so they could see the need and back his vision for ministry. And trusting God who can do all things. Juna Amagara is an indigenous ministry, that is, it is 100% run by Ugandan staff, now over 200 people.

Moments of joy? There were plenty. Being with the kids, their bright faces and perfect smiles, it was easy to teach them Polish language. They are excellent mimics. Meeting the moms and grandmas who are so grateful to have their kids in school. Taking a hike by Lake Bunyonyi to catch a motorboat across and finding no boat. Night fell in total darkness except for a thunderstorm we could see flashing in the distance. A few prayers and phone calls later, a boat came for us, appearing out of the dark with nary a light. We made it to shelter ten minutes before the rain. We toured Queen Elizabeth National Park where we saw elephants and hippos and crocodiles and huge birds. We prayed to see zebras and, sure enough, passed a small herd by the side of the road. But the highlight for me was a chance encounter at the equator. We had stopped for lunch. Just by chance, the Uganda Minister of Tourism, Mr. Godfrey Kiwanda dropped in with his entourage. While he was greeting everyone, we were waved over. We met him, took photos with our arms around him. I even got to complain about too many speed bumps. With him was Zari Hassan, who is the Kim Kardashian of Uganda. I showed people in Kampala photos of me with Zari and they couldn’t believe it.

In conclusion, I have to say I am generally suspicious of funding organizations in the third world. Basia and I regularly go to Guatemala on mission trips because we see how the funds are spent. But even though conditions in Uganda are worse, the people have hope and joy based on faith. It is just amazing to see. Juna Amagara has done miraculous things with the funds people have donated. And yes, there is more to do. Uganda is a huge land of opportunity. We hope to return to this beautiful country. 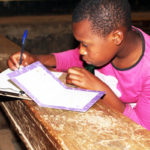 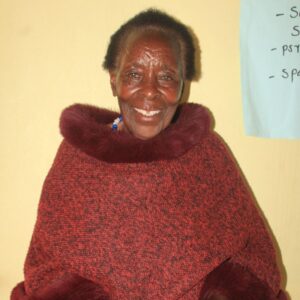 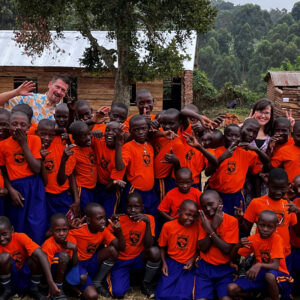 We’re Back to School!